Posted on February 4, 2015 by lothianrenewables 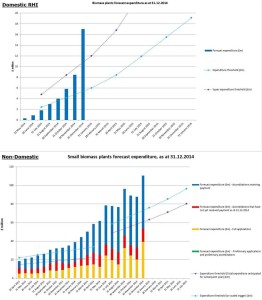 The DECC Monthly Reports released on 30th January for RHI show that the level of applications for Domestic RHI is above the super trigger – if the forecast expenditure remains at the same growth rate, then the biomass tariff will be degressed by 20% for applications from 1st April, from 10.98 to 8.78p/kWh.

For the Non-Domestic RHI the small biomass band has again hit its individual trigger, with current growth figures strongly suggesting
a 10% degression (+5% if total RHI trigger being hit) as of 1st April. The medium (200kWth-999kWth) and large biomass (1MWth+) tariffs are unlikely to be degressed,

The final degression decisions will be announced in the next quarterly assessment, released 27th February.

This entry was posted in Biomass, News. Bookmark the permalink.